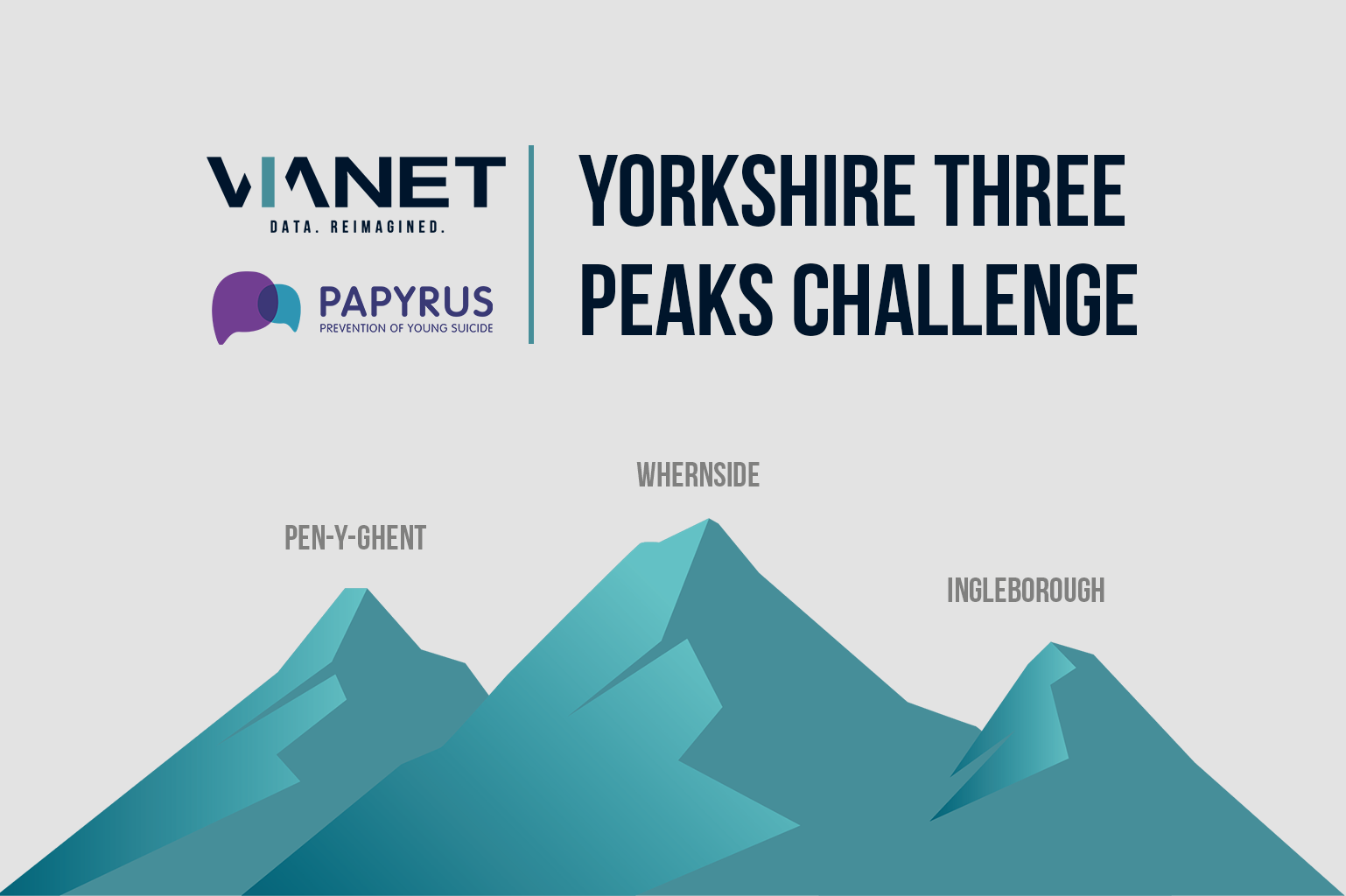 As part of Vianet’s aim to ‘Give Something Back’, over the next 6 months, we are taking part in various fundraising activities for our chosen charity, PAPYRUS.  A team of Vianet employees are willing to put themselves to the test to take on the Yorkshire Three Peaks Challenge as our HOPEWALK for 2021.

At Vianet, we understand that mental health can affect people in many ways. Recognising the way in which the mental health of so many people has been affected by the pandemic, it is more important than ever to focus our efforts on well-being during this period. Vianet continues to make a real difference to others by supporting PAPYRUS, a national charity dedicated to the prevention of young suicide. According to PAPYRUS (2021), suicide is the biggest killer of young people – male and female – under the age of 35 in the UK. PAPYRUS operates HOPELINE UK, a confidential call, text, and email helpline for young people with thoughts of suicide or those concerned about a young person who may have thoughts of suicide.

Michelle Staniforth, Head of People & Development told us: “Our Vianet family told us they wanted to do more to ‘Give Something Back’ and whilst we’ve always regularly supported a range of charities, we felt that we could really make a meaningful difference by partnering with one charity for the year. The well-being of our people is always at the forefront of our agenda, even more so due to the pandemic, so we wanted to join forces with a charity that supports people with their mental health. PAPYRUS had previously been suggested to us by some of our employees, so they were the perfect choice for us.”

VIANET VOLUNTEERS HAVE THE STAMINA, GRIT AND DETERMINATION

A major fundraising activity on our list to raise awareness about PAPYRUS is the Yorkshire Three Peaks Challenge. It is our organised HOPEWALK with one common goal – to smash the stigma and get conversation around suicide started. Our challenge is scheduled for Saturday 04 September 2021, just ahead of World Suicide Prevention Day. Currently, we have a team of 17 employees from across our organisation participating along with a support team consisting of 4 employees. Our volunteers will aim to tackle the peaks of Pen-y-ghent, Whernside and Ingleborough in under 12 hours, a total of 24 miles and 1585m of ascent. In preparation, our volunteers have already begun training for the challenge, taking on both local beauty spots, as well as the Yorkshire peaks themselves.

“As well as fundraising for a fantastic cause with the team, this challenge is just what I’ve needed to motivate myself both physically and mentally as we come out of the pandemic and back into ‘reality’.

With gyms closing and restrictions in place, my daily routine has been completely shaken up over the past 18 months, as it has for many of us. This challenge not only gives me the push I’ve needed to get back into a fitness routine through training, but by giving myself a new challenge it has also been great for my mental focus and health.”

In the upcoming months, Vianet have plans to hold other smaller scale events to raise funds for PAPYRUS, alongside the Yorkshire Three Peaks Challenge. Recently, to kickstart the Wimbledon tournament, we held a ‘Strawberries and Cream’ event and in August we plan to have an ‘Executive Car Wash’ where members of the Exec team will wash employees’ cars, for a donation of course!

Vianet is making a difference by fundraising in aid of PAPYRUS to raise awareness and support young suicide prevention. If you would like to support our team, you can make a donation at https://www.justgiving.com/fundraising/VianetYTP2021.

DELIVERING ACTIONABLE DATA INSIGHT THROUGH INTERACTIVE REPORT PACKS SmartInsight provides a visual, interactive and simple to use reporting suite, delivering data that is tailored to our customers. SmartInsight’s dashboard and features make it quick and easy for you to access the insight you need with concise reporting, giving you the tools to drive efficiency and high-level decision making throughout your business.     […]

As part of Vianet’s aim to ‘Give Something Back’, we are taking part in various fundraising activities for our chosen charity, PAPYRUS. PAPYRUS is a young person suicide prevention charity which exist to reduce the number of young people who take their own lives by shattering the stigma around suicide and equipping young people […]

Apprenticeships play a large part in creating opportunities for employees that allow them to move within the business, rather than limiting progression to ‘the next rung on the ladder’. As an organisation that’s experiencing rapid growth, instilling a culture that focusses on learning and development has been an integral part of Vianet’s ongoing success. Abi […]